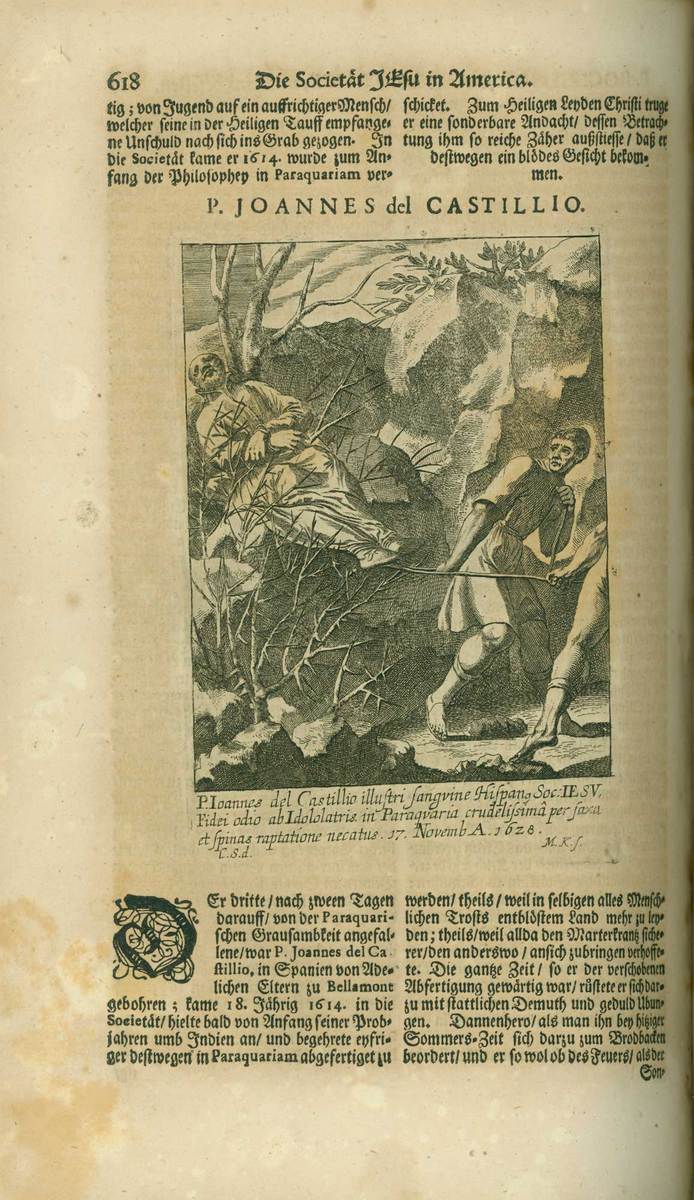 Engraving showing the martyrdom of Jesuit missionaries in Paraguay (1683)

One of the most important and controversial Jesuit mission efforts was that established among the Guarani peoples in what is now southern Brazil, Paraguay, Uruguay, and northeastern Argentina. The first missionary settlements – reducciones or “reductions” – were set up by the Jesuits at the request of the Spanish colonial administration in 1609, and by the middle of the eighteenth century there were almost fifty reductions in the Rio de la Plata area, each containing between one thousand and eight thousand inhabitants. The reductions were organized by the Jesuits as autonomous communities, politically and economically separate from the rest of the colony. Europeans were forbidden to settle within the reductions, and outside contact was kept to a minimum. The Indians were taught Christian doctrine, reading, writing and singing, and their traditional crafts of painting and sculpture were encouraged. The reductions were organized on a combination of private and collective property, so that while much of the agricultural work was communal, each family also had its own gardens and livestock. Through this organization the Jesuits hoped to instill in the Indians the conviction that their lands, goods and labor were their own property, and not that of the European settlers.

At the peak period of 1730-1740 almost one hundred thousand Indians were living in these settlements; but by the last quarter of the eighteenth century the reductions were in decline. The failure of the reductions was partly political in nature. In 1750 Spain ceded to Portugal a parcel of border territory on which seven reductions were located. Rather than move their settlements into Spanish territory the Indians of these reductions rebelled, and had to be subdued by force of arms. The final decline of the reductions dates from 1768,with the expulsion of the Jesuits from the Spanish colonies, and the consequent placement of the reductions under civil and secular authority. From the first the whole concept of the reductions had been a subject of controversy. Some early writers saw the reductions as an attempt by the Jesuits to establish an empire of their own in Paraguay; others viewed the project as a threat to the traditional slave-run colonial system. And modern critics continue to question the value of any such intervention, no matter how benign, in the cultural development of other peoples.