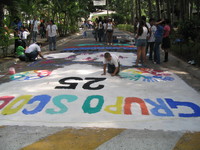 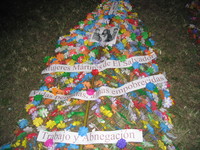 A banner used in the march commemorating the Salvadoran Martyrs in San Salvador, 2006.

People around the world remember and commemorate the Salvadoran Martyrs in unique ways.  Each year, the University of Central America is a gathering place to commemorate the Salvadoran Martyrs and loved ones who died during the long civil war. The day begins with alfombras. University and high school students make murals of colored rock salt on the pavement of the university’s main throughway. The day ends with a candlelight vigil. Salvadoran people – young and old, rural and urban – march together in a procession of remembrance. Marchers sing together as they walk through campus, smearing the murals, as they carry banners of solidarity and images of the fallen.

At Loyola, two memorials stand as physical reminders of the Salvadoran Martyrs.  The Martyrs Memorial, constructed in 2010, is appropriately situated outside of Madonna della Strada Chapel.  A simple short wall listing the names of the victims of the November 16, 1989 massacre, it honors the memory of those who stood up for their beliefs.  A second memorial, "Wounded Angel," was also installed outside of Madonna della Strada Chapel in 2010.  Created by artist Emily Young, the sculpture first went on public display at Kew Gardens in London.  Loyola purchased the piece and brought it to campus to serve as a reminder of the Salvadoran Martyrs and other innocent victims of oppression throughout the Salvadoran Civil War.