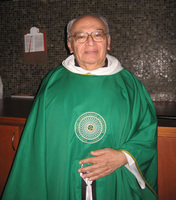 The phrase "option for the poor" was first used by Fr. Pedro Arrupe, Superior General of the Society of Jesus (Jesuits) in 1968 in a letter the sent to the Jesuits of Latin America.  Subsequently, this principle, which is thoroughly rooted in Scripture (e.g., Exodus 22: 20-26, Leviticus 19:9-10, Isaiah 58:5-7, Matthew 25:34-40, Luke 6:20-23), has received much attention in official Latin American church documents, in papal teachings, and in the writings of liberation theologians. The option synthetizes the fact that precisely because God loves and wills the good of all persons, God “preferentially” sides with the oppressed and marginalized and invites us to do the same for the sake of realizing social inclusion and the common good.

Second, seeking to discern God’s presence in history and to reflect upon this ordinary and everyday human encounter with God, Gutiérrez offers the classic definition of Latin American Liberation theology as: “critical reflection upon Christian praxis.” For Latin American liberation theologians, socio-economic and political experiences must be considered in efforts to move beyond mere arguments of human development into practices and policies that bring about human liberation from various forms of oppression.

Third, liberation theologians understand “liberation” as a life-giving and saving event that touches all forms of sin and moves toward integral human freedom. Latin American liberation theologians readily admit that liberation from socio-political oppression and other human oppressive conditions is not all that God’s salvation encompasses.  But just as the Council of Chalcedon (451) declares that human and divine realities are distinguished and related but never separated in the person of Jesus Christ, the acts through which God liberates/saves persons in history can never be separated from one another but always carefully distinguished.  In this integral approach, liberation theologians affirm “The Church is of the world: in a certain sense the Church is the world: the Church is not Non-World.”  To summarize, Latin American liberation theology underscores how God reaches out to enslaved persons and liberates them from their bondage and in so doing also offers God’s saving presence (Exodus 3:7-10).