Although the Reagan administration provided almost $4 billion in economic and military aid to El Salvador, many in the United States opposed these practices and lobbied for reform of U.S. policy in Latin America. Throughout the 1980s, organizations advocated on behalf of the marginalized citizens in Central America and were soon recognized as part of a larger peace movement. Activism in solidarity with Central America was as varied as the organizations themselves. Traditional methods of protest and demonstration were often employed, while more drastic methods, like hunger strikes and throwing blood on government buildings, gave the peace movement a distinct image. Because of their controversial nature, these groups faced everything from harassment, mail tampering, and disrupted demonstrations, to FBI scrutiny, death threats, and group infiltration. Although many worked in conjunction with one another, the groups that formed took up specific issues that plagued the region. For instance, a group called Witness for Peace turned their efforts toward stopping the Contras in Nicaragua while the Pledge of Resistance took steps to prevent U.S. involvement in that country. Perhaps most relevant to the work of Ellacuría and to the Chicagoland area were the Sanctuary movement and CISPES (Committee in Solidarity with the People of El Salvador), who tasked themselves with protecting Salvadoran refugees in the United States and protesting the Salvadoran military. The nation as a whole felt the influence of these organizations, and their impact also motivated the Loyola University Chicago community to stand up for El Salvador.

Chicago became a focal point for protest against U.S. policy in Latin America. While the Sanctuary movement began in Tucson, Arizona, it had strong implications for many Chicago-based protest groups. Sanctuary gave Salvadorans the ability to escape their war-torn country and provided housing in the United States. Because of its unwavering support to Central American governments, the United States denied official asylum to those wishing to leave. As Sanctuary grew, founder Jim Corbett gave the responsibility of organizing a unified group of sanctuaries to the Chicago Religious Task Force on Central America (CRTF). Already founded with the purpose of lobbying against aid to El Salvador, the CRTF became the national headquarters for Sanctuary and eventually organized 423 different sanctuaries across the United States.

Another organization that had connections to the Chicagoland area was CISPES. With a mission to call attention to the Salvadoran military’s human rights abuses and to stop U.S aid packages from going to the country, CISPES was comprised of many different branches in cities across the United States and had become the primary opponent of U.S. foreign policy by 1981. They employed more aggressive protest techniques than many other peace organizations. CISPES did not align itself with any religious organizations, giving it the power to support armed struggle and resistance in El Salvador. The Chicago branch of the organization even went so far as to damage the property of local Congressman Dan Rostenkowski, leaving red paint on his office door and coffins in his front yard. CISPES-Chicago was known for their intense lobbying of Rostenkowski. They distributed flyers that contrasted what Rostenkowski had said about the situation in El Salvador with his actions in Congress. They also flooded his mailbox with postcards from constituents who urged Rostenkowski to get the U.S. to stop military aid. CISPES’s more overt actions caught the attention of the FBI, which launched a full-scale criminal investigation from 1981 to 1985. Anyone associated with CISPES was subject to investigation, surveillance, and infiltration by both FBI agents and private groups tasked with gathering information for the government. Organizations like Sanctuary and CISPES demonstrated what solidarity movements looked like at a national level, and CISPES ultimately served as the model for Loyola’s style of activism against the U.S. government. 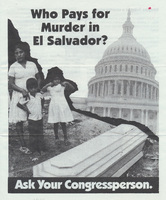 Flyer distributed by CISPES
(Committee in Solidarity with the
People of El Salvador) urging
constituents to put pressure on
their congressional representitives.
Interior of pamphlet details the
situation of El Salvador.

Billboard located across the street
from the Loyola "L" station tagged
with graffiti stating "No Contra Aid." 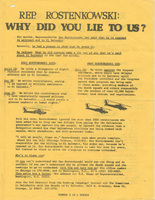 Flyer comparing Rep. Rostenkowski's words of solidarity with the people of El Salvador to his action of passing legislation supporting the Salvadoran government.

A postcard sent to Rep. Rostenkowski
asking him to end U.S. military aid to El Salvador.