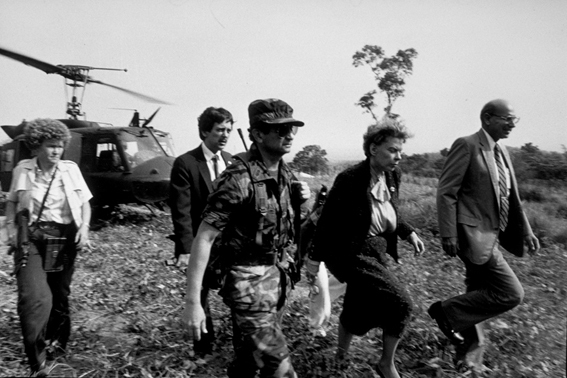 The Salvadoran Civil War emerged at a time of great political change in the United States. In 1980, the majority of Americans deemed President Jimmy Carter’s foreign policy focus on human rights a failure and elected Ronald Reagan to the presidency. The Reagan Administration increased funding for counterinsurgency efforts of the Salvadoran military in an attempt to stem the penetration of Soviet and Cuban communism in the Western Hemisphere and to stop another Nicaragua where the leftist Sandinistas triumphed. Others in the United States, however, believed that the government backed an institution – the military – that carried out egregious human rights violations. These peace activists spoke up by organizing public demonstrations and events on college campuses to inform the public about how their tax dollars funded repression. Loyola University Chicago faculty, staff, and students participated in this movement at the local and national level by protesting Ronald Reagan’s foreign policy.